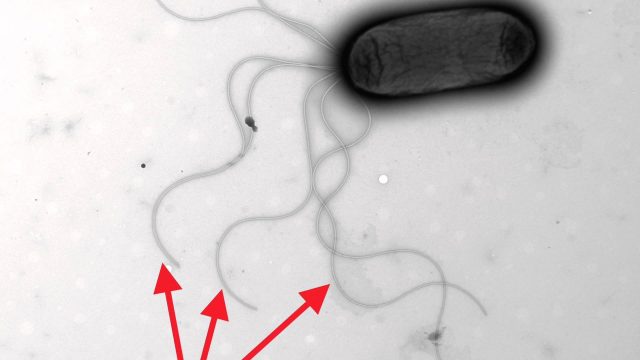 In 1946, J. Lederberg and E. L. Tatum first demonstrated that genetic information can be exchanged between different mutant bacterial strains. This corresponds to a type of sexuality and leads to genetic recombination.

A. Genetic recombination in bacteria

In their classic experiment, Lederberg and Tatum used two different auxotrophic bacterial strains. One (A) was auxotrophic for methionine (Met – ) and biotin (Bio – ). This strain required methionine and biotin, but not threonine and leucine (Thr + , Leu + ), to be added to the medium. The opposite was true for bacterial strain B, auxotrophic for threonine and leucine (Thr – , Leu – ), but prototrophic for methionine and biotin (Met + , Bio + ). When the cultures were mixed together without the addition of any of these four amino acids and then plated on an agar plate with minimal medium, a few single colonies (Met + , Bio + , Thr + , Leu + ) unexpectedly appeared. Although this occurred rarely (about 1 in 10 7 platedcells), a few colonies with altered genetic properties usually appeared owing to the large number of plated bacteria. The interpretation: genetic recombination between strain A and strain B. The genetic properties of the parent cells complemented each other (genetic complementation). (Figure adapted from Stent & Calendar, 1978).

B. Conjugation in bacteria

Later, the genetic exchange between bacteria (conjugation) was demonstrated by light microscopy. Conjugation occurs with bacteria possessing a gene that enables frequent recombination. Bacterial DNA transfer occurs in one direction only. “Male” chromosomal material is introduced into a “female” cell. The so-called male and female cells of E.coli differ in the presence of a fertility factor (F). When F + and F – cells are mixed together, conjugal pairs can form with attachment of a male (F + ) sex pilus to the surface of an F – cell. (Photograph from Science 257 :1037, 1992). C. Integration of the F factor into an Hfr – chromosome The F factor can be integrated into the bacterial chromosome by means of specific crossingover. After the factor is integrated, the original bacterial chromosome with the sections a, b, and c contains additional genes, the F factor genes(e,d). Such a chromosome is called an Hfr chromosome (Hfr, high frequency of recombination) owing to its high rate of recombination with genes of other cells as a result of conjugation. D. Transfer of F DNA from an F + to an F – cell Bacteria may contain the F factor(fertility) as an additional small chromosome, i.e., a small ring shaped DNA molecule (F plasmid) of about 94000 base pairs (not shown to scale). This corresponds to about 1/40th of the total genetic information of a bacterial chromosome. It occurs once per cell and can be transferred to other bacterial cells. About a third of the F + DNA consists of transfer genes, including genes for the formation of sex pili. The transfer of the F factor begins after a strand of the DNA double helix is opened. One strand is transferred to the acceptor cell. There it is replicated, so that it becomes double-stranded. The DNA strand remaining in the donor cell is likewise restored to a double strand by replication. Thus, DNA synthesis occurs in both the donor and the acceptor cell. When all is concluded, the acceptor cell is also an F + cell.(Figures in C and D adapted from Watson et al., 1987). 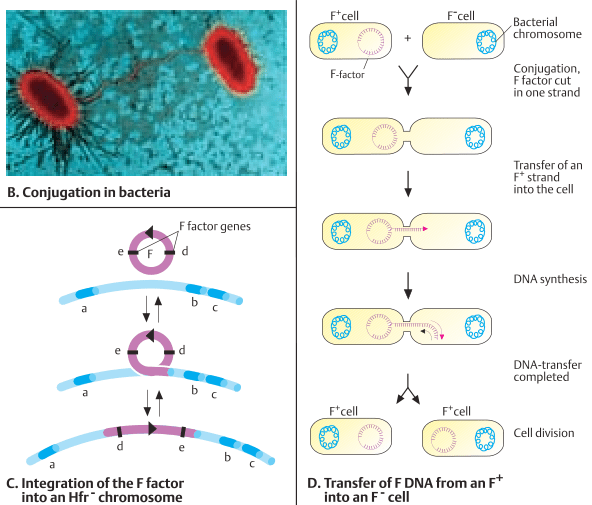