The fruit is a pod containing black seeds the size of a bean. Its discharges ensure the stabilization of deforested soils.

The plant is used for food purposes, fresh tubers or leaves, in the form of porridges, cakes, tofus, etc., it is used in many culinary preparations.

Present in the Chinese Pharmacopoeia since 200 years BC, its Latin name Pueraria lobata means “always in a state of youth” (stink = child). Indian kudzu Pueraria tuberosa (Willd.) DC. is used in Ayurvedic medicine, it has androgenic and aphrodisiac effects, anti-inflammatory, it may become hepatotoxic when taken in high doses.

Some plants could naturally help you stop smoking, alcohol or other so-called “soft” drugs. they have already proven their effectiveness, such as Avena sativa, more commonly known as oats, St. John’s wort or Griffonia simplicifolia rich in 5-HTP, which increases serotonin levels in the body and therefore considerably improves mood. If you have already tried these plants without success, Kudzu (Pueraria lobata) is a highly recommended plant (pronounced “cudzoo”. Native to Southeast Asia). Kudzu was originally found in China, Japan, Korea, Taiwan, the Philippines, Viet Nam, Malaysia, Indonesia, and New Caledonia. It has been used in Chinese medicine for decades to cure allergies, migraines, and diarrhea. It is only in recent years that our Western pharmacopeia has been interested in this root to help alcohol and tobacco withdrawal.

In Chinese, kudzu means “drunkenness dissipator”. Dr. David Lee had already observed that the northern Chinese drank kudzu tea to sober up and heal the hangover.

In 1991, Dr. David Lee conducted a study in China at Shin-Yanget University. He tested the effects of kudzu tea on laboratory rats that had been exposed to alcohol. The rats’ motor coordination was improved. They seemed less intoxicated.

The following year, Dr. David Lee suggested to researchers at the Bowles Center for Alcohol Studies in North Carolina, an additional study: to see if kudzu helps wean rats that have a genetic tendency to like alcohol. The researchers found that administering kudzu to “alcoholic” rats calmed their drinking tendency.

In 2011, following these encouraging results, Harvard University researchers tested the efficacy of kudzu against placebo in a group of men and women who regularly drank 3 or 4 pints of beer per day. They discovered two interesting phenomena:

This plant not only limits the impulses but also reduces the damage that these toxic substances have caused to the body over time. By stimulating the activity of certain enzymes, Kudzu root helps to fight oxidative stress produced by the consumption of cigarettes and alcohol and thus limits their harmful effects. In China, the herbal tea of this plant is also used to limit the harmful effects of alcohol. Thus, taking kudzu could reduce the famous “hangover” of the next morning.

recent studies have revealed that the roots of kudzu are rich in isoflavones of the flavonoid family: daidzein, known as an anti-inflammatory and antimicrobial agent. The daidzein that acts against cancer. Genistein, which is an anti-leukemic agent. But above all, kudzu is the only source of puerarine.

All these isoflavones are antioxidants and reduce alcohol-related damage.

Studies have shown that these isoflavones stimulate the brain’s natural “opioids”. They act on neurotransmitters such as serotonin, GABA and glutamate.

The common factors of addiction (alcohol, tobacco, drugs, sugar…) bring you peace and well-being. This involves increasing the production of dopamine in your brain.

Kudzu isoflavones help to relieve addiction. They are involved in the reward system. They stimulate the production of dopamine instead of your favorite “drug”. You are then more relaxed, and your attention turns away from the object of your addiction. You no longer feel the need to have another drink, another cigarette or yet another square of chocolate.

Kudzu compensates for the pleasure you get from your usual “drug” and helps to relieve your addiction. The most important thing is that kudzu itself is not addictive. In fact, several clinical trials have confirmed its safety. However, isoflavones are not recommended for breast cancer.

Thanks to kudzu, you can gradually replace your “drug” and slowly accustom your brain to receiving less strong dopamine impulses.

Beyond the kudzu in cures against addictions, kudzu is reputed to be effective against stress in general. It soothes, which makes it easier to sleep.

A calming and soothing action

Kudzu root contains highly active substances such as daidzin, daidzein, and puerarin, which are grouped under the term isoflavones. These substances, also present in soya, have a calming and soothing action by acting on the central nervous system and thus make it possible to feel less the desires and impulses towards these toxic substances. The studies, which have been carried out so far in animals, should soon be confirmed in humans. However, the experiments already carried out on average smokers have given very good results in just a few days. Even the patches bought “as a backup” at the pharmacy were not used! No feeling of lack, no irritability, everything goes smoothly and without side effects.

How much and when?

Inhalation. Inhale boiling water vapours in which 3-10 g of flowers have been infused for several minutes.

For heavy smokers or heavy drinkers, double the doses and distribute them throughout the day. 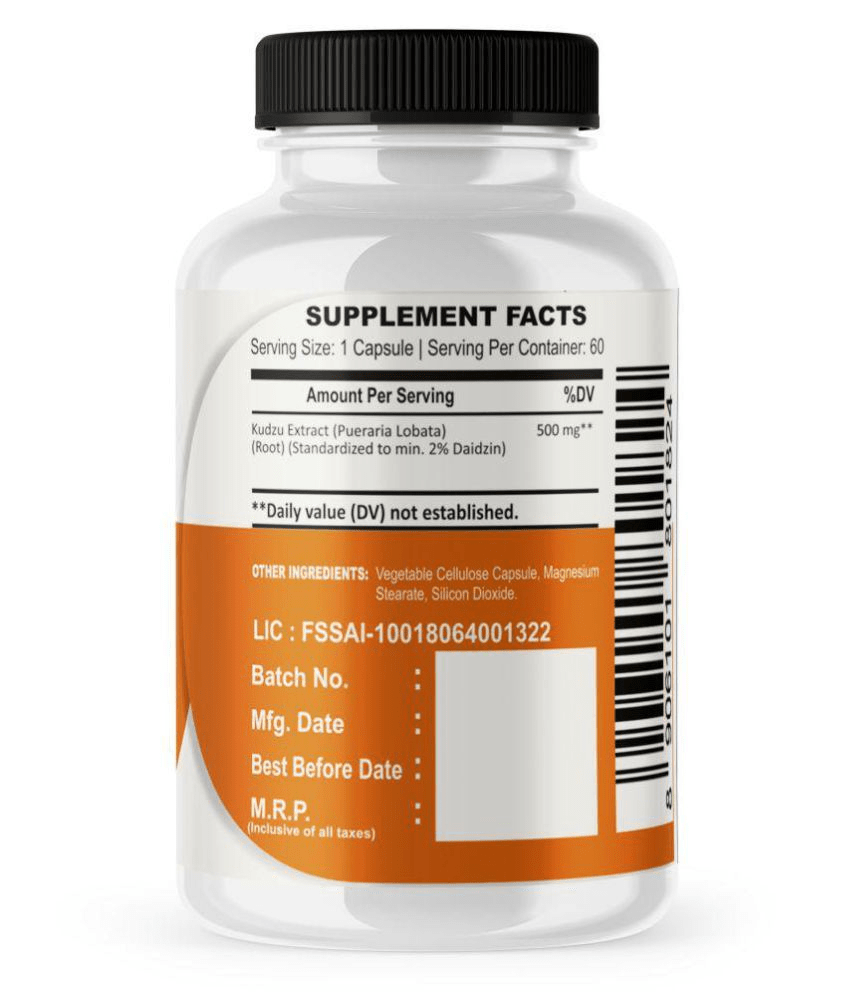 The program should be continued for at least one month, in synergy with B-group vitamins. Usually, the effects are quickly felt.

women who are pregnant or who wish to become pregnant. Never consume any plants in this case without the advice of a physician.

A beneficial action against cardiovascular diseases

Its use has also been shown to be effective in lowering blood pressure, improving blood circulation and reducing inflammation, making it a supplement of choice for the treatment of cardiovascular diseases (angina pectoris, myocardial infarction, and high blood pressure).

Action on the pancreatic metabolism and the oxidative stress: In rats, experiments have shown the protective effect of puerarin on certain cells of the pancreas responsible for insulin secretion. It inhibits the programmed death of these cells, stimulates insulin secretion and finally, inhibits the production of free radicals by increasing the activity of catalases and superoxide-dismutases (SOD).

Puerarin, which is rapidly absorbed by the intestine, increases glucose tolerance in people with type II diabetes by lowering blood glucose levels and increasing the storage of glucose as glycogen in the liver and heart.

Obesogenic Diet – The High-Calorie Diet For Gaining Weight and Muscle

Can you take Zinc and Vitamin C together?